For over 40 years RB has written  songs that chronicle the human condition. He took up guitar in order to write songs, beginning with an ongoing study and appreciation of country blues greats Blind Blake, Blind Lemon Jefferson, Mississippi John Hurt, Robert Johnson, Charlie Patton and others. On occasion, he has presented "A Brief History of the Country Blues." Other influences are early Elvis, early Rolling Stones, Ry Cooder, Captain Beefheart and Lou Reed. Literary and cultural inspirations include Hemingway, Jim Thompson, FDR, Ernie Banks, Monty Python, Bob Dylan and Sherlock Holmes, among others. Many others. His compositions have aired on commercial and public radio and TV,  the internet, the back porch, the basement, various clubs, halls and gin mills. His bands include: 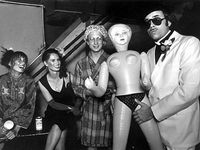 "I'm a cynical optimist. When I've had a good sleep, I'm hopeful."